The Mouse, The Scream, and The Jaws of Death 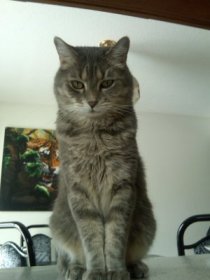 My wife, Tracy and I have three cats.  Pippin (age 15), Merry (age 14), and Strider (age 10).  I grew up with dogs and didn’t like cats even into adulthood.  They always seemed aloof and uninteresting to me.  Well, I have learned the error of my ways now and can honestly say that nothing could be further from the truth.

Each of our cats has their own unique personality and habits.  Pippin likes to have his tummy scratched while eating, Merry likes to snuggle up with me during my afternoon snooze to get her tummy rubbed, and Strider… well, he’s just an attention whore.  If you lay your hand down, he’ll rub his own tummy on it.

One thing they all have in common — they kill mice on sight. (D’uh! They are cats, after all.)  But, even in that, there are distinct differences.  Pippin and Strider, both males, are quick and lethal.  Grab the mouse in their jaws, give it a shake and fling it to the ground.  I’m sure if they could beat their chests at that point, they would.  Then, it’s “play time”.  The mouse is tossed in the air and pounced on over and over and over again.

Merry, on the other hand, is far more cruel.  Obviously, it’s not intentional, it’s just what she does.  After the grab, shake, and fling, she leaves the mouse in the center of the room and backs off.  The poor, injured mouse struggles to drag itself across the floor, trying to get under a chair.  As it gets to within inches of the chair, Merry jumps up, snatches it up in her teeth and deposits in back into the middle of the floor.  Eventually, the mouse becomes too exhausted to try again and just lays there; at which point she’ll poke it with her claws to try and stimulate it back into action. 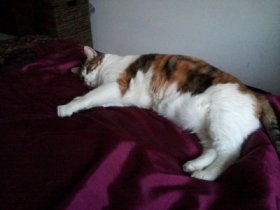 In any case, it’s fascinating to watch a predator in action.

I remember one time in particular; this was before Strider came along.  We only had Pippin and Merry.  The two of them had cornered a mouse up on top of the valance over the curtain rod on the big floor-to-ceiling window in our dining room.  They were both sitting on the floor staring straight up at it.  An impasse.

Well, that just wouldn’t do.  So, while Tracy decided to stay a “safe” distance away in the kitchen, I went and got the broom and swished the mouse off its perch to the floor.

Strider as a kitten

They were after it instantly as it literally ran for its life along the peninsula of cupboards that divides the dining room and the kitchen.  Around the corner and into the kitchen.

Right towards my wife.

The mouse turned and ran in the opposite direction — BACK TOWARDS THE CATS — and, of course, was caught and killed.  I’ve always imagined that in that moment, the mouse thought, “I’d rather face the jaws of death than EVER hear that noise again!”

About the Author: Mark Posey