Autographs.  In my pro wrestling days, I signed lots of them.  For kids.  For adults.  I’ve never understood why anyone would want one.  Not just mine; anyone’s.  I mean, really, what’s the big deal about getting someone’s signature on a piece of paper?  I just don’t get it.  I’d much rather buy whomever a coffee and sit and chat for fifteen or twenty minutes.

Over the years, I’ve compiled a mental list of people I’d love to sit down and have coffee with. And I know the idea sounds far-fetched by itself.  But, I’ve already shared drinks — sometimes coffee, sometimes something stiffer — with a great many of my wrestling heroes.  I have less trouble imagining having coffee with, say, Jennifer Aniston, than the average person.

But, there is another list in my head.  People that I would love to sit down and have coffee with and never will.  Because they’ve died.

Interestingly, the same guy has topped both lists.

Most people nowadays ask, “Who?”  And that’s unfortunate.  Leo was an amazing guy with a great message.  Through his books and his lectures, he taught me a lot.

I have a friend, Jack, who was a professor at a university out east where Leo appeared as  a guest lecturer.  While he was there, the hotel he was supposed to stay at was over-booked and Leo ended up without a room.  Jack offered Leo his guest room.  “With Leo,” Jack once told me, “what you saw was what you got.”  Apparently, they talked until early morning.  I would have loved to do that. 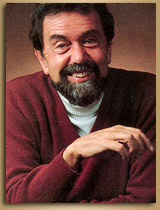 Born in Los Angeles, Felice Leonardo Buscaglia (he later inverted the initials) was the youngest of four children of Italian immigrants. He was raised Roman Catholic, and was influenced by Buddhism in his adult life. The combination of physically demonstrative love of life learned from his Mediterranean parents combined with the inner reflection learned from travels and studies in Asia served him well.

His childhood is well known to his listeners and readers; it provided many fable-like experiences that he shared throughout his work. Readers from many diverse cultures identified with these stories, being reminded of elements of their own upbringing. So many letters to him started similar to this: “Dear Leo, I hope I can call you that rather than Dr. Buscaglia because I feel as if I know you, as if we are friends.” His “Mama stories” continue to be quoted by fans. [When someone would identify themselves to him as a “fan,” he would invariably reply, “Don’t be a fan. Fans are fickle and will soon drop you for something else. Be a friend. You can count on friends.”) While other children were playing chase games, little Leo was playing school, always casting himself as the teacher, and always with willing pupils.

He served in the U.S. Navy in World War II. The slender young sailor did not see combat, but he certainly saw its aftermath in his duties in the dental section of the military hospital, helping to reconstruct shattered faces. Using the benefits of the G. I. Bill, he was able to go to the private University of Southern California after the war. His association with USC is somewhat unique in the academic world. He received his bachelor’s, master’s and doctorate degrees there, and later became a faculty member. Upon his retirement, the university president named Buscaglia Professor at Large, an honorary title held by only one other person at that time. His non-credit Love 1A class was right for the times when it began in the late 1960s. He prepared a talk for educational conferences based on these sessions, which he wanted to call simply “Love”.

The reaction to both his dynamic, evangelical delivery and the content was like nothing ever seen in educational circles, and Buscaglia became a popular educational conference presenter. This exposure led to speaking requests by colleges, and by other professional and business organizations.

Once these heartfelt talks were seen on national television they became the largest single money generators for PBS through much of the 1980s. While these presentations paved the way for many motivational speakers on PBS after him, Buscaglia never considered himself one of them. He was simply a teacher whose classroom had become the world.

Over eleven million copies of his books had been purchased in the U.S. by the time of his death by heart attack in 1998. Approximately 24 editions are available throughout the world. He was very pleased and surprised by the strong sales in Italy. He never imagined Italians would need an American to remind them of the importance of food, family, sharing and love of life, because he had learned these things from his Italian parents.

The study of love brought him to the study of life. “To live in love is to live in life, and to live in life is to live in love.” But this should never be done passively. He wrote, “It’s not enough to have lived. We should determine to live for something. May I suggest that it be creating joy for others, sharing what we have for the betterment of personkind, bringing hope to the lost and love to the lonely.” Only you will be able to discover, realize, develop and actualize your uniqueness. And when you do, it’s your duty to then “give it away.”

About the Author: Mark Posey